I don't expect to be reincarnated,
so I'll blog about dying and death (with appropriate irreverence) while I'm still alive.

I think I'm running out of time to read my books.

I'm typing this in a room filled with books, in a house filled with books. A quick estimate indicates that I have about 400 linear feet of books (100 feet more than the length of a football field, with the books standing up, not lying in the grass).


With an average thickness of one inch, and 12 books per foot, those 400 feet mean that I have a frightening total of about 4,800 books. That can't compare with the Library of Congress's collection of several million books, but it's pretty good for an amateur bibliophile.


And that 4,800 doesn't include hundreds of other books on my iPad, Kindle Fire, desktop, laptop and smart phone, and on the UPS truck coming from Amazon. Or what I might pick up at Barnes & Noble this afternoon.


I'm what is called an avid reader. I'm also a collector. That can be fun --  or a dangerous combination.


I read everything. I read labels, cereal boxes, signs and even magazines that I should have no interest in (including one for tow truck operators, one for poultry farmers, one for appliance dealers and another one about air compressors).


When I was a young teenager I subscribed to about two dozen magazines -- everything there was about science, cars, cameras and electronics. They took up a lot of space. One summer I decided that instead of going to the beach club every day, I would devote three days each week to going through my collection. I'd cut out the interesting articles and file them for future reeference.


This was actually a problem, not a solution.


At the age of 14 I could not afford to buy a photocopier and therefore could not resolve the dilemma caused by pages with important articles on both sides -- but about different subjects that should go into separate folders.


But even worse was the depressing realization that the magazines were coming in faster than I could read, cut and file them. I stopped being a librarian and swam more.


I assume that I've read about half of my books. To make it simple, I'll assume I have about 2,500 p-books and e-books to go. According to my theory, I have about 23 years left. I acquire about 80 books a year. I read about 100 books a year. I'll assume that as I age my acquisition rate may diminish, and my reading speed may also diminish, However I'll probably have more time to read.


Although my College Board scores in "verbal" were much better than in math, my quick computation makes me think I'll die with about 2,400 unread books.


What should I do?


Should I read faster, live longer, stop buying, or get rid of a lot of books.


Sadly, none of the options seem likely.


(Top photo is from Fotolia.com) 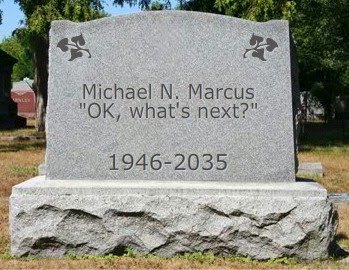 I was born on 15 April 1946. I am a proud member of the first cohort of the Baby Boom (along with Dolly Parton, Donny Trump, Billy Clinton, Georgie Bush, Candy Bergen, Sly Stallone and Reggie Jackson).

When I was a young teenager, I felt invincible. I thought I could live FOREVER, or at least to a "hundert und zwanzig" (to 120, from a Jewish blessing for long life).

Now, at age 64 (in 2010), I'm much more realistic. I know that I won't last forever. I had a lens replacement a few months ago, and other body parts don't work as well (or as frequently) as they once did. I'm contemplating cosmetic surgery for my wrinkled old-man's neck, and I watch TV commercials for items that I previously ignored (NO--not adult diapers, thankfully).
As a teenager, I was focused forward. I contemplated getting a driver's license, getting laid, going to college, voting, drinking legally, making money, seeing a new century, seeing the world, and maybe even seeing other planets.

At 64 there's not that much to look forward to.

If I'm still around in May, 2012 (and if the Federal treasury is still around), I'll start receiving a big Social Security payment each month. Unless the politicians fuck it up, Medicare should keep paying for a big chunk of my growing medical bills.

I am not looking forward to retirement, because I love my work. I'd still like to travel some more.

I've had a fascination with Morocco since I watched "The Foreign Legion" TV show. I want to see Spain, Italy, Greece, Israel, India, China, Japan and Australia. I need to get back to Medicine Bow National Forest in Wyoming to take a picture I missed in 1961. Our station wagon was overheating and my father said we had to quickly drive to a lower altitude.

I have no children or grandchildren to see graduating or marrying.

I probably won't go back to school.

There are no foods I haven't tasted yet that I want to taste. 3D-TV doesn't impress me. (It might if the geeky glasses can be eliminated). I'll probably never own a Ferrari or go sky diving, bungee jumping or water skiing. I've done enough snow skiing, and even went SCUBA diving under the ice. I already own the best dog in the world and have been married to a very sexy woman for a long time.

So...it seems like the next big event after my 65th birthday will be my death.

If I don't start a new blog or website about every eight weeks, I get itchy. So I'll blog about getting old and getting dead.

Based on one online calculator, I should die when I'm 88 years old. My father died in 2009, at 87. Supposedly we should live five years longer than our same-gender parent, which should give me 92 years. Expecting to go beyond 90 seems a bit piggish, so I'll settle for 89 years. That's conveniently 25 years from now--a quarter-century--which gives me a good title for this blog.

It should be an interesting ride--even if it's all down hill. 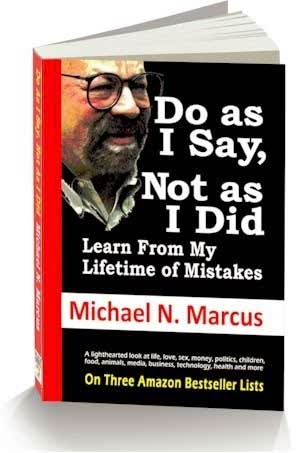 
(some are no longer being updated)


BookMakingBlog is where I discuss writing, editing and publishing -- and other things.

Worldwide Penis News provides just what it says, mostly with an overdose of humor.

It's Too Easy to get Pregnant reports on some of the tragedies caused by people who should not be parents.

911 Wackos provides a look at weird 911 calls and callers

Letters to April Wong is a collection of ridiculous and scam emails sent to a person who does not exist.

OH, how stupid! provides an an occasional look at some of the stupidest things done by human beings.

DialZero is a collection of what's silly, stupid or surprising in telecom.

WeLoveClams is for people who love clams